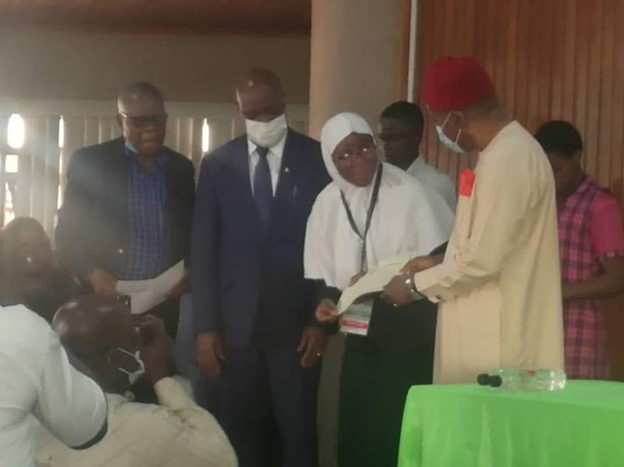 The executives of the GSU Alumni Association visited the proposed Pen Resource University Gombe on Friday, September 11, 2021, led by its National President, Dr. Adamu Jibir of the Department of Economics.

Disclosing the purpose of the visit, the association’s national leader said that the alumni were at the proposed varsity to witness the tremendous efforts and commitment put in place.

Dr. Adamu Jibir said that the members of the executive were astonished by the modern facilities on the ground.

While going around the proposed PRU, we were all overwhelmed, overwhelmed in the sense that our minds went to the fact that these are things that Gombe was supposed to have long before now, “the president said.

Jibir added that the proposed university will surely benefit not only the indigenous of Gombe State but the entire people of the Northeast, Nigeria, and the world at large.

The president pleaded that the proposed Pen Resource University should consider the members of the GSU Alumni while recruiting both teaching and non-teaching staff, as the association has capable and intellectually sound graduates across the country.

While complimenting the efforts of the promoter, the president, on behalf of the executives and members of the association, has appointed Dr. Sani Jauro as an “ambassador of education in Gombe State”.

Dr. Jibir said, “The Gombe State University Alumni Association has named you as an Ambassador of Education in Gombe State, and we look forward to a formal ceremony in the near future.”

In his address, the promoter of the proposed Pen Resource University, Sani Jauro, Ph.D., welcomed and thanked the President and his council members for the visit.

Dr. Sani Jauro said that the proposed PRU is honored to receive the Alumni Association of the great Gombe State University, which is one of the best state universities in Nigeria.

“For the GSU Alumni Association to show interest in what we are doing, it shows that the future is promising,” he said. Dr.

Sani Jauro was happy to note that most of the council members of the GSU Alumni are Ph.D. holders.

He revealed that the issue of a pen resource university has been on the table since 2007, but the proprietors decided to start with the nursery, primary, and secondary school levels, which has now given birth to the proposed Pen Resource University.

Referring to the request of the National President of the GSU Alumni Association, Dr. Sani Jauro said that PRU is meant for the members of the association.

Jauro added that the policy to be used in recruiting staff at the institution is to look for young academics with strong brainpower who can lead the university to realize its vision.

Certainly, in the beginning, we have to get senior academics that have distinguished themselves in academia and who have the capacity to groom the young ones so that they can take over and make a difference.

He reiterated that PRU is a university established to make a difference, a university that will as much as possible be devoid of all the problems bedeviling the university system in Nigeria.

The promoter finally thanked and appreciated the previous leadership for donating seedlings to the proposed varsity and promised to keep and continue to value the relationship between the PRU and the GSU Alumni Association, making it stronger and stronger.

Please be aware that specific individuals are falsely presenting themselves as admissions agents, affiliates or representatives of Pen Resource University, Gombe. Under this false pretense, they may demand payment for Application / Admission fee and subsequently Registration fees. These claims are fraudulent and invalid and you are strongly advised to exercise great caution when you are seeking admission into Pen Resource University, Gombe. Below are some of the precautionary features you should be mindful of:

Criminal and/or civil liabilities may arise from such actions and we intend to cooperate with competent law enforcement agencies and take appropriate actions. Accordingly, we would ask you to immediately contact us via email at info@pru.edu.ng and copy admissions@pru.edu.ng upon receiving any suspicious claim and notify the police or other competent authorities momentarily.

Please note that under no circumstances shall Pen Resource University be held liable or responsible for any claims, losses, damages, expenses or other inconvenience resulting from or in any way connected to the actions of these imposters.